Take Extreme Care When Opening Up Your PC

In the 1990s Australia experienced one of its record breaking heatwaves.   As a result PC’s have been failing in loads of places as they struggled to operate in the horrid conditions – specifically those in places without air conditioning.   On this particular occasion we were working out on a site where most of the PCs had had their motherboards fry from overheating. We began our job of opening them up to do the repairs and discovered that not only had the motherboards fried but they were also filled with dust, dirt, cockroaches and other assorted bugs.

One particular PC I decided it would be best to take back to the workshop to do the work on it.  When I opened it up, I found a fried mouse on the motherboard.  The poor thing must had got in through an opening in the front of the case that the owner made, perhaps in hope that it would increase the airflow and help the machine to survive the heat. 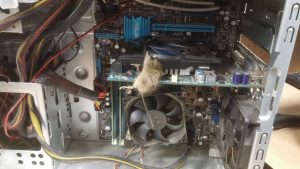 That very same week a colleague was working on a computer that had gone off with a BANG!  According to the owner it had been making odd sounds for some time when suddenly there was a loud bang, followed by a horrid acrid smell emitting from the case.   The bang was most likely the result of a power supply that had decided to kick the bucket.  So my colleague opened up the PC to find that a baby brown snake fried on the mother board.  Once again proving that being an IT technician is a dangerous job.

I’m just grateful that all I ever discovered was a fried mouse.   There is however, in my professional opinion, only one solution to fixing your PC when you find a snake in it.